MacPhun, the company who brought FX Photo Studio to the iPhoneography community, and MobiTog, have teamed up to create the upcoming International iPhoneography Show. The first exhibition will kick off in New York on December 16-22 at The Soho Gallery for Digital Art. It will feature approximately 200 pictures captured with iPhones by over 150 different artists from around the world, making it the biggest exhibition of iPhone photography of the year. There will also be more international exhibitions taking place in multiple parts of the globe. 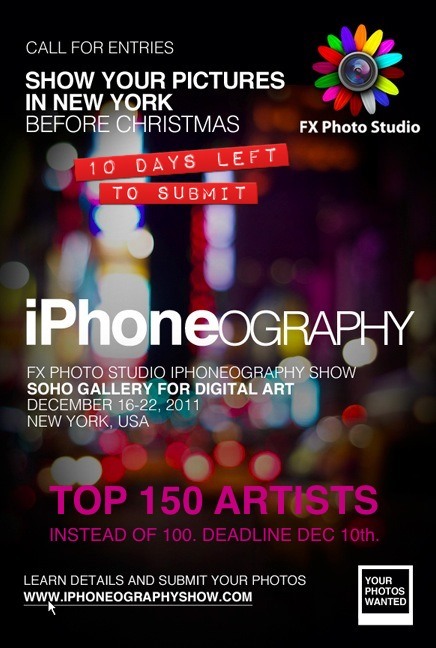 Now, here's the best part! The International iPhoneography Show wants YOU to have a chance to show off your fantastic iPhoneography abilities, and is still accepting entries to be featured in the show. The deadline for entering is December 10th. All you need to do is take your best iPhone photo and edit it with FX Photo Studio on your iPhone or iPad, and e-mail it to show@macphun.com or use this submission form. All entered photos will be posted on iphoneographyshow.com.

On December 12th, 100 of the best artists will be named and featured in the New York exhibit at The Soho Gallery for Digital Art. The chosen artists will also receive cool prizes including photo software and hardware, special offers, discounts and more. The best picture featured at the exhibition will be chosen by public vote and the lucky phoneographer will receive a $500 Apple Gift Card.

Check out the video below to view some of the entries submitted thus far. Get all the details you need here.